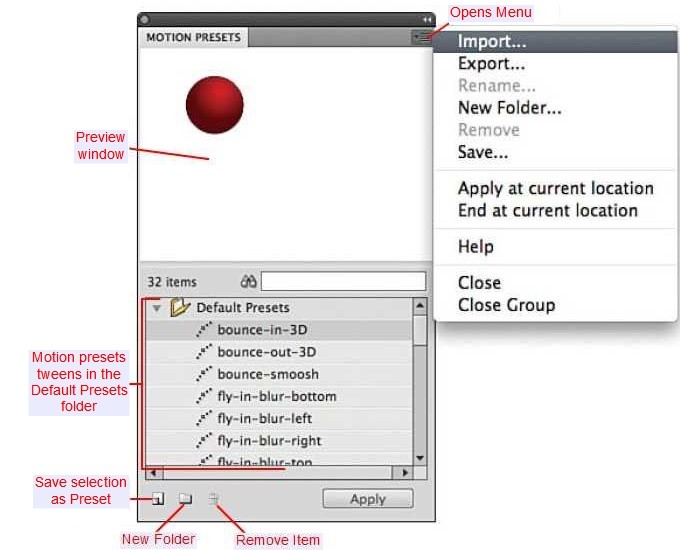 When an animation from "Motion Presets" is applied to an object, it works as a "Animation Template", that will be transfered/ added to that object. Only Frames, Motion and Path are transfered; keeping the form and colors of the object.
- Only a single preset animation can be applied to an object. If another Motion Preset is added to the same object, it will replace the previous tween.
- The presets with 3D Animation can only be applied to Movie Clip Symbol instances, which is the only object for 3D effects.

The following steps show how to apply and modify a motion preset called small-bounce:

- In the following presentation you can see how to do this example (click the image below). 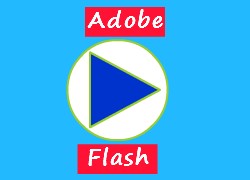 - The FLA file with this example can be downloaded from: small-bounce Motion Presets.

- The animation created with motion preset can be edited, modified like any Motion Tween animation; you can add and delete frames in the Timeline, its path can be modified, color effects can be applied, etc.

A Motion Preset is created from a Motion Tween animation on the Stage, with the purpose of reusing it anytime with other Symbol and text fields.
Once you have created a Motion Tween animation on the Stage, right-click the animated object (or its frames in the Timeline), and then choose Save as Motion Preset. A dialog box opens where you name the preset, and then click OK. Once that's done, your newly named preset appears in the Custom Presets folder in the Motion Presets panel.
- Your custom preset won't have an animated preview like the ones that come with Flash.

Which tag can be used to create input text field in web page?
<form> <input> <div>
Which CSS property displays the text in a small-caps font?
display font-variant font-style
What instruction displays a notice box with a message inside it, in JavaScript?
for() Date() alert()
Indicate the PHP code used to get the users IP.
$_SERVER["HTTP_USER_AGENT"] $_SERVER["REMOTE_ADDR"] $_GET[]
Tutorial Motion Presets