In 3D Space there are used three directions, or axes: X (horizontal), Y (vertical), and Z (for depth or perspective).
When you move or rotate an object by the Z axis, it becomes a 3D object.
Flash has two special tools for working with objects in 3D space: "3D Rotation Tool", and "3D Translation Tool".

- Only the Text and Movie Clip Symbols can be used to create 3D effect.

Flash provides two different 3D space: global and local. The default mode is Global. This can be enabled /disabled from the "Global Transform" button (shown in the image below), located in the options area of the "Tools panel" (appears when you select one of the "3D Rotation" or "3D Translation" tools). 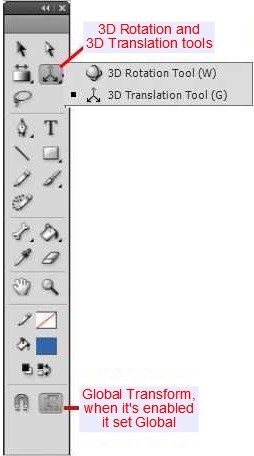 When you move a Movie Clip in Z-axis, with the "3D Translation tool", three arrows appear in the 3D object: the X-axis is read, the Y-axis is green, and the Z-axis is blue.
When you select the "3D Rotation Tool", these axes appears inside an orange circle.

To rotate the object on one of the axes, hold the cursor over one of the colored axes, and move it (a tooltip appears indicating the axis). The object is rotated around a point in the center of the circle. You can drag and move this center point.
To rotate in all three dimensions at once, use the orange circle.
To move the object in 3D space along the same three axes, use the "3D Translation Tool" and drag the arrowhead of the axes. When the Local mode is set (the "Global Transform" button is disabled), the object is moved in perspective.

Try the next example:
When you select an Movie Clip instance on the Stage, 3D Position and View section of the Properties panel appears, as shown in the image below. This section contains options to move and place more exactly the Movie Clip in 3D space. 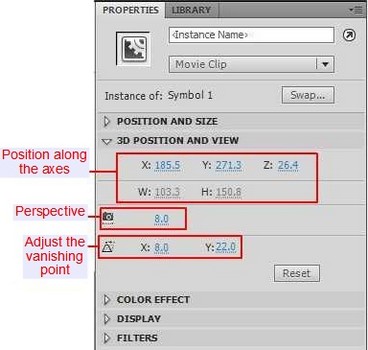 - The Perspective Angle affects the size and view of 3D movie clips on the Stage. It's like zooming in and out with a camera lens, making the object appear closer to the viewer, or further away. The default angle is 55 degrees. You can set values between 1 and 180.
- The Vanishing Point is the point way off in the distance where an object disappears out of sight. As objects approach the vanishing point, they get smaller (as is shown in the picture below).
To move the vanishing point, change the X and Y values on the Properties panel next to the Vanishing Point.
The Reset button moves the Vanishing Point to the default position in center of the Stage. 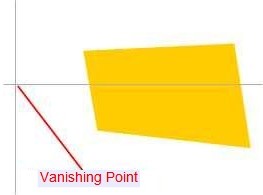 When you select multiple Movie Clips, and move one of them, all are moved in the same way, such as a single object.